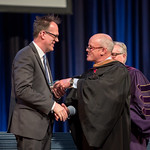 Jeff Lockhart is a Northwest University alumnus, holding a Master’s degree in Business Administration.  He currently serves as the Executive Director of the Kirkland Performance Center, where he oversees programming, funding, and operational revitalization strategies for the organization. Jeff spearheaded NU’s music industry business and recording arts program, Creatio, and helped develop and launch two fully accredited degrees for our students.  Jeff co-founded, manages, and plays drums for Crème Tangerine, a Beatles tribute band.   His love of music provided him with a vision and career direction.  Jeff has said that everything he learned to succeed in leadership and business, he learned from being in a rock and roll band – passion, collaboration, and grit.  Today he uses music to motivate and inspire people to create and to contribute to the community in a positive way. 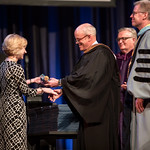 Vickie Rekow is alumna of Northwest University, graduating with the BA in Organizational Management in 1999. She is also a valued employee at Northwest, serving as the Senior Director for Student Financial Services.  In just two years she led a team to combine two departments into one and is transforming the way NU serves students and families with financial aid. Before coming to NU, Vickie served as Director for scholarship Services for the College Success Foundation and Director of Student Financial Services at SPU before that. In addition to her business and financial acumen, and reputation as a thought leader in higher education, it’s evident to both colleagues and students that Vickie’s mission is to make Christian higher education accessible and affordable. She and her husband, Dana, serve on the National Christian Foundation board, work with the Generous Giving organization, and have a long history of giving their time and talents to higher education.

Jacob Witt came to Northwest University as a student in 1995. He found his place as an Interdisciplinary History major, as a Resident Assistant, and as a member of the debate team. As debate team captain, Jacob led the team to their highest national placement, 6th place. After graduation, Jacob and his wife, Autumn, embarked on a 3-year teaching assignment in rural Northern Japan. They grounded themselves in a local church, serving in various roles. This experience made such an impact that he would later return to the earthquake and tsunami devastated region of Northern Japan in 2011 to help with clean-up and donation delivery.   Jacob has earned two Master’s degrees: in Communication theory and in Linguistics, followed by a PhD in Second Language Acquisition & Teaching at the University of Arizona.  Jacob joined the NU English department in 2010. In addition to his faculty role, Jacob returned to his NU roots to coach the debate team, and is a deeply respected coach in the national debate community.